My oil tank can’t be leaking because I’m not using more oil, right?

That is something we at GreenTrax hear… daily… from our customers. If only we had a nickel for every time we heard someone say they know that their oil tank is NOT leaking, only to come to find out that is leaking when we pull it out of the ground, we could probably retire! LOL

Seriously though, no one ever knows for sure that their buried oil tank is NOT leaking.

But there are several ways (all bad) you can find out that your old heating oil tank is leaking.

We will look at the “EFFECT” first then briefly list a possible “CAUSE”.

10 effects of an oil tank leak

1. You have the oil company fill the tank, then 2 days later the tank is empty.

You either have a very bad leak OR someone stole the oil. Sadly, that does still happen from time to time.

2. You have a strong heating oil odor in your house.

This is bad. Either your tank is leaking or, especially if you have a neighbor with a tank close to your property, someone else’s oil tank is leaking. If you have a smell of oil in the house or basement – double check the furnace and surrounding area. Make sure there are no obvious oil tank leaks around that area.

See #3 above – a leaking tank has caused oil to get into the sump pump basin.

5. You have oil seeping through the wall of the basement?

Caused by a leaking UST or AST.

6. Your furnace shut off because it is sucking up water from the tank?

There are holes in the tank. Groundwater is getting into the tank and now is at least 4 inches high in the bottom.

7. Oil & water overflowed out the top of the fill pipe onto the ground, now I have an oil spill.

This is from hard rains and a lot of water getting into the tank and pushing the oil out. There are multiple holes in the tank allowing water to enter.

8. The tank is buried in a hillside and all the grass in one area is brown and dead.

The tank is leaking and coming out of the hillside and killing the vegetation.

9. The oil company won’t fill my tank anymore. They said the whistle, vent pipe or fill pipe is broken, rusted off or not functioning.

10. My next door neighbor knocked on my door and said he has oil in his basement; they don’t have an oil tank.

If you still have an oil tank underground or aboveground, whether in use or out of use, go through all the steps above and see if any of these apply to you. If you have a heating oil tank, Call GreenTrax right away. Then call your home insurance company and see if they will cover some or all of this, as this may become an expensive problem, quickly. If you have an oil tank and it leaked and contaminated the neighbors basement, yard, or drinking water well, you are responsible for the cost of this cleanup. Don’t panic though, there is a homeowner reimbursement fund in Maryland that will reimburse you the out-of-pocket cost for this cleanup.

You’re not out of the weeds yet…

But do not get comfortable to quickly though. Knowing what the problem doesn’t fix it. These problems listed here are all BAD. If the oil tank leak has progressed to the point that you can determine by answering yes to any of these “effects”, then the leak is already worse than the “typical” tank removal and remediation job that we do daily.

The bottom line is, even if you do not have any of the 10 problems listed here (and to be clear, you want to deal with the tank BEFORE it progresses to that point), you as the owner of a buried oil tank will not know if it’s leaking. You will not be able to determine just by oil usage alone if the tank is leaking. Why is that you ask?

Well, outside temperature variations, thermostat settings, home insulation, and efficiency of the furnace are all factors that determine how much oil you burn and how quickly. More plainly put, you cannot say “My oil company isn’t delivering oil more frequently and I am not burning more oil, so my tank isn’t leaking”. You also cannot say “I stick the tank regularly and the level doesn’t change so my tank is not leaking”.

Be mindful that if the age of the buried tank is over 20 years, it needs to be removed or legally abandoned in place, by an MDE LICENSED tank removal contractor (that’s us). Most all buried tanks are NOT protected or coated with anything, so the bare steel has been in the ground rusting for decades.

If you have questions or concerns call us as we want to help you with whatever your tank situation is. 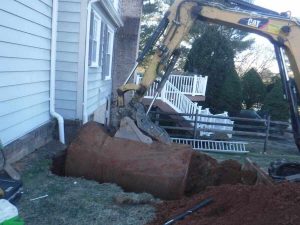 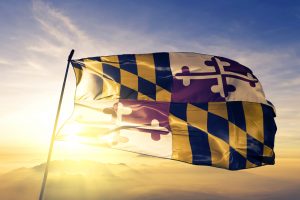